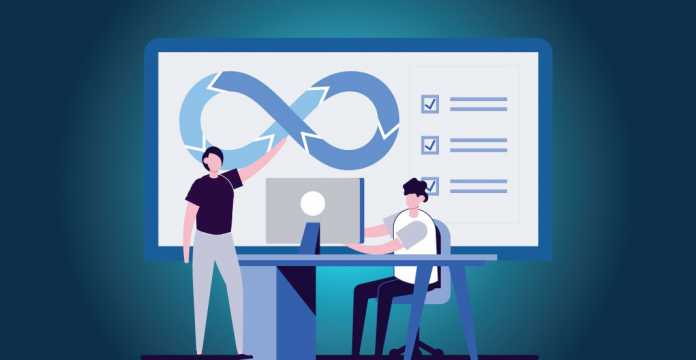 Everyone must have heard of the trending technology, “DevOps.” DevOps is not a technology rather a methodology or software development approach with which superior quality software can be developed quickly. With modern businesses moving at the cloud’s speed, DevOp’s software delivery strategy has become more and more popular to design, test, deploy, and track software applications with speed, quality, and control. Sounds interesting? To know more, let’s dive into this DevOps Tutorial for Beginners article.

Why do we need DevOps?

DevOps overcame the drawbacks of the Waterfall and Agile model, That’s right!! These were the two popular models that were used for software development before DevOps. 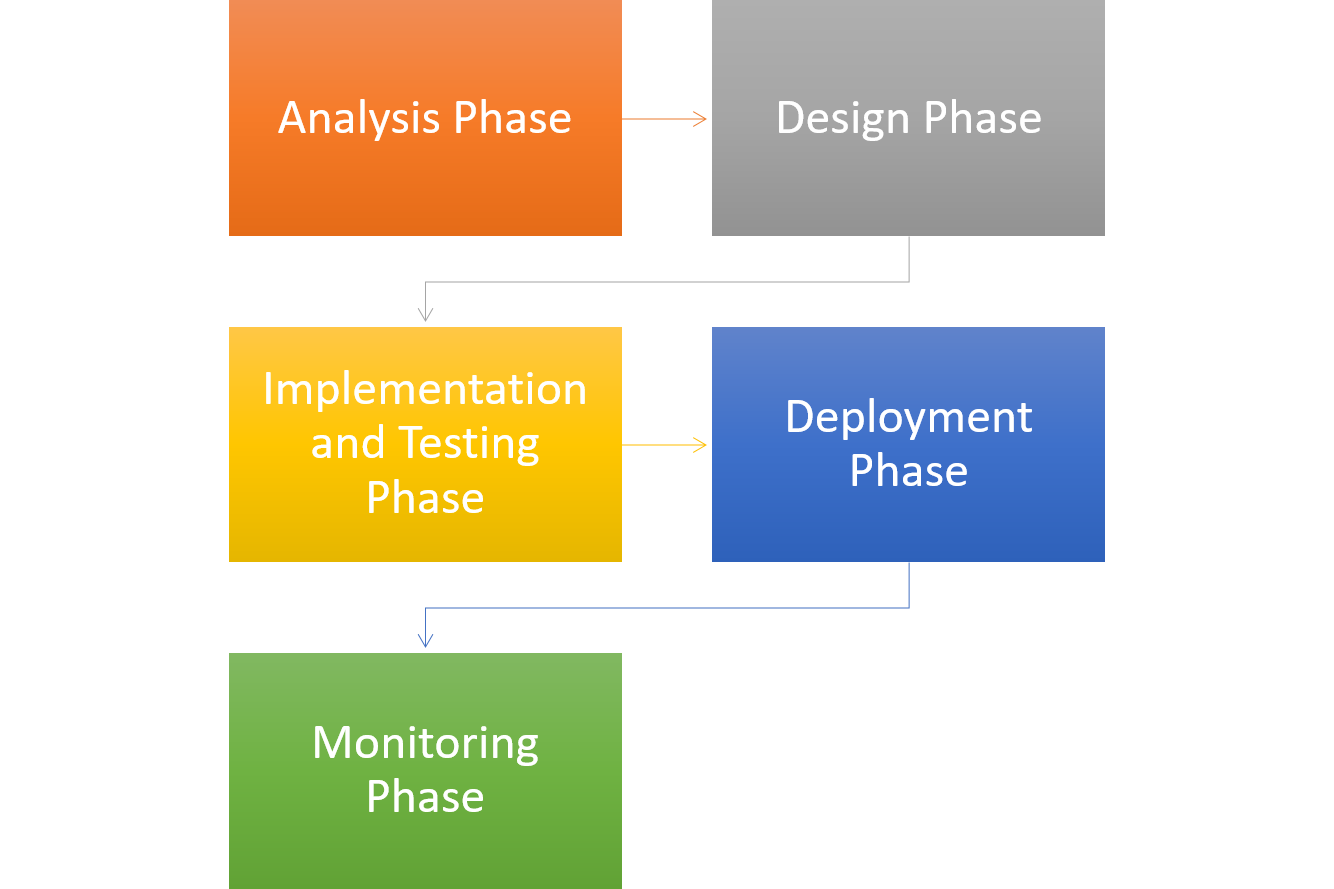 Let’s see its advantages and disadvantages

To summarize, the Waterfall model was only acceptable for projects with stable specifications. By stable, I mean that over time, requirements will not change. But this is an improbable thing in today’s world, as specifications keep changing from time to time. 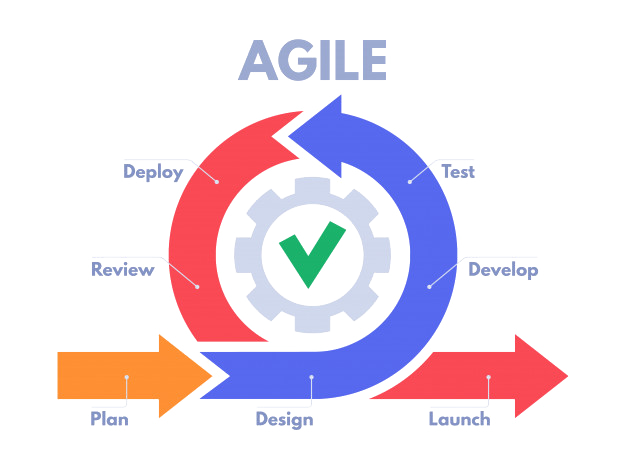 This model effectively splits the product into smaller divisions and ultimately incorporates them for testing, along with focusing on incorporating small changes, customer feedback, etc. Each iteration has analysis, design, implement, and testing phases similar to the waterfall model.

Let’s see its advantages and disadvantages.

There was a lack of coordination in Agile methodology between developers and operation engineers, which slowed down the development phase and updates. Tech companies have started to understand the need for better team coordination and quicker software delivery.

DevOps was introduced then to overcome this problem. DevOps allowed ongoing delivery of software with less complex issues to address and solve problems quicker. So, far we understood why do we need DevOps. In the next section of this ‘DevOps Tutorial for Beginners’ we shall see what DevOps is.

For any organization that wants to be lean and agile and can adapt quickly to evolving demands on the market, DevOps is important. DevOps is actually two words Development and Operations, a software development methodology that makes “Developers” and “operators” work together. 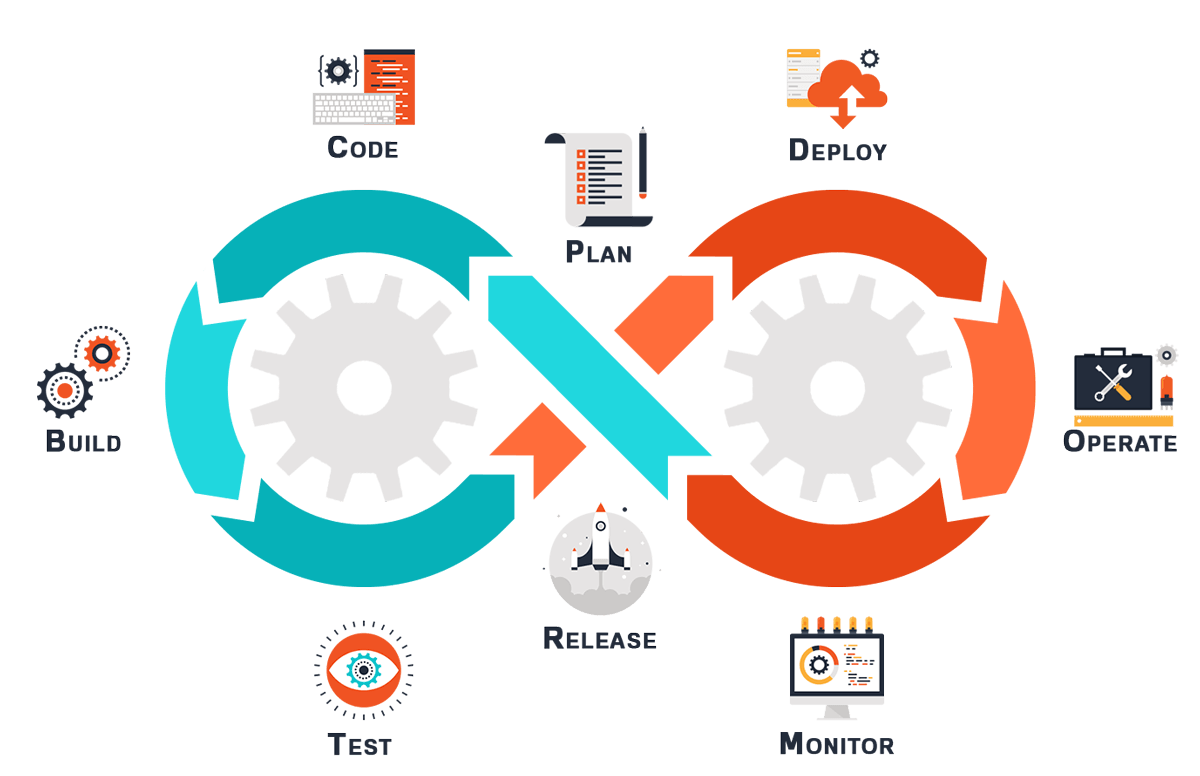 The combination of this common approach across Development and Operations and the capability to track, evaluate and optimize gives DevOps a cooperative approach to delivering reliable software as soon as possible across businesses, development, and operational stakeholders.

In the next section of this ‘DevOps Tutorial for Beginners’ article, let’s check out the DevOps life cycle in detail. 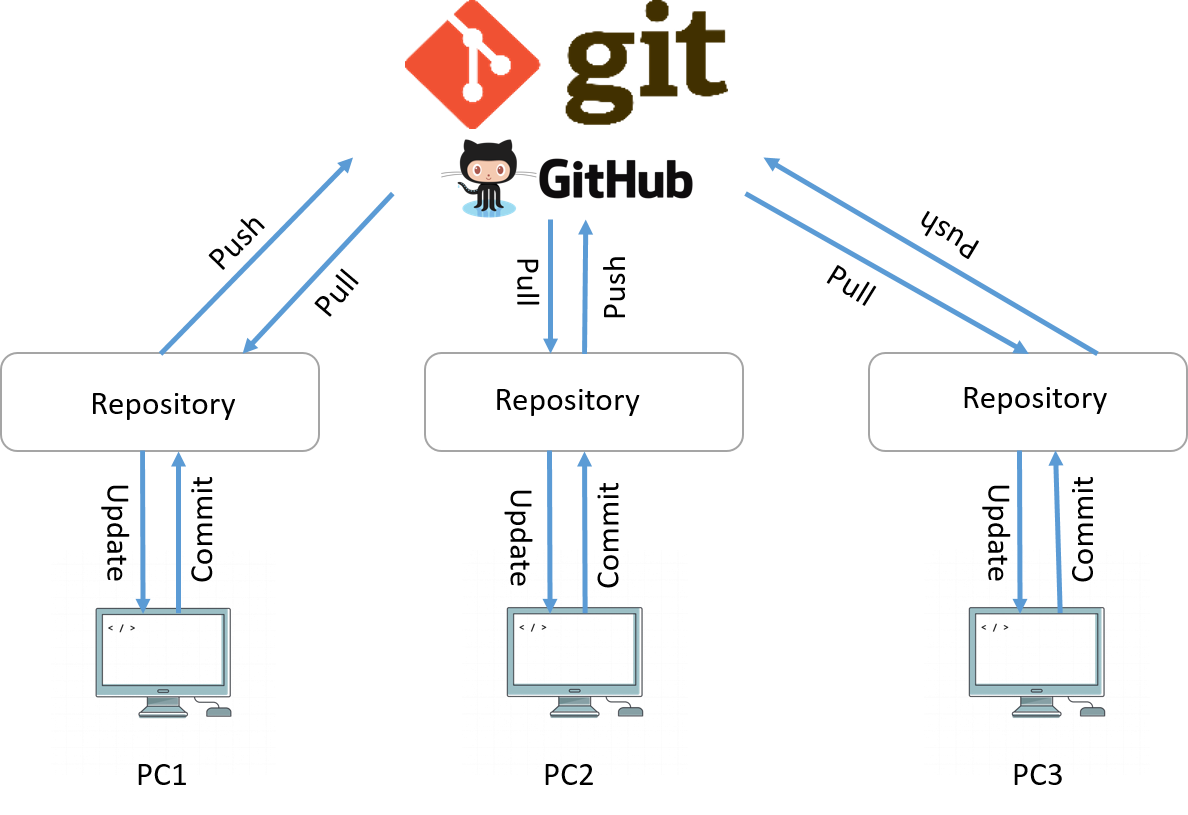 Continuous development is the program’s preparation and coding, where you decide the plan and developers begin to write the application source code. There are no DevOps tools needed for planning, but many tools are available to manage the code. The code is written in any language but maintained mostly with Version Control Tools, and this process is known as Source code Management. Git is a version control tool for distributed non-linear workflows that provides data protection for quality software development.

Tools Used: GIT is used to maintain different versions of the code as we code and build at this stage; SVN, Mercurial, and Maven are the other tools that can be used. 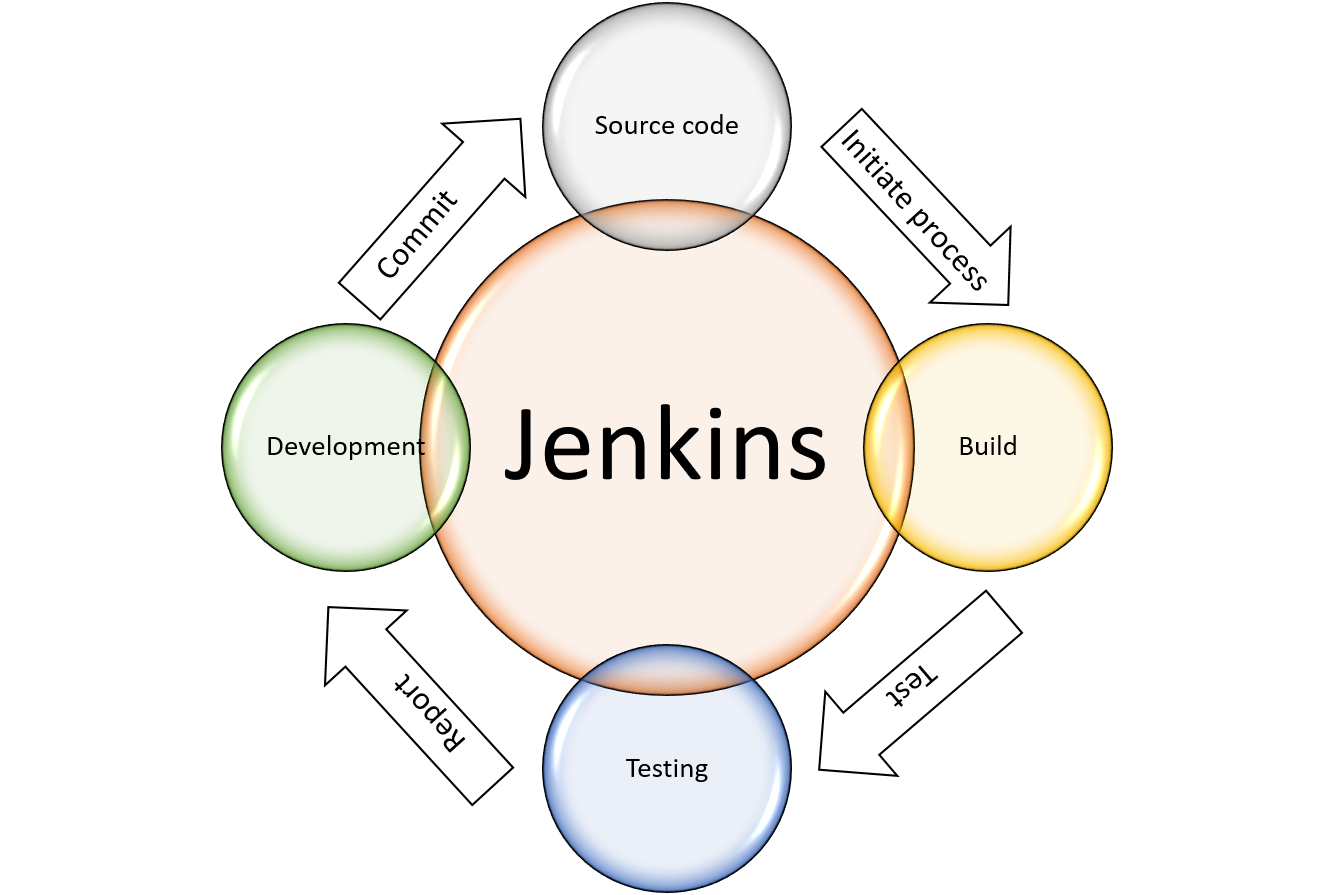 In this step, if our code makes a new function, it is continuously integrated with the current code. The new code has to be merged with the latest one ‘continuously,’ as the ongoing development continues, and the changed code should ensure that there are no bugs in the current environment for it to function smoothly.

Tools Used: Jenkins is one of the tools used; TeamCity and Travis can also be used.

After Continuous Integration, the Software developed is continuously tested for bugs. Several automation tools are used to test our codes developed continuously to detect any bugs. Dockers can be used in this phase as containers for simulating the test environment.

Tools Used: Selenium is widely used for automation testing, and we can use JUnit as well. With the aid of Jenkins, all these can be automated. 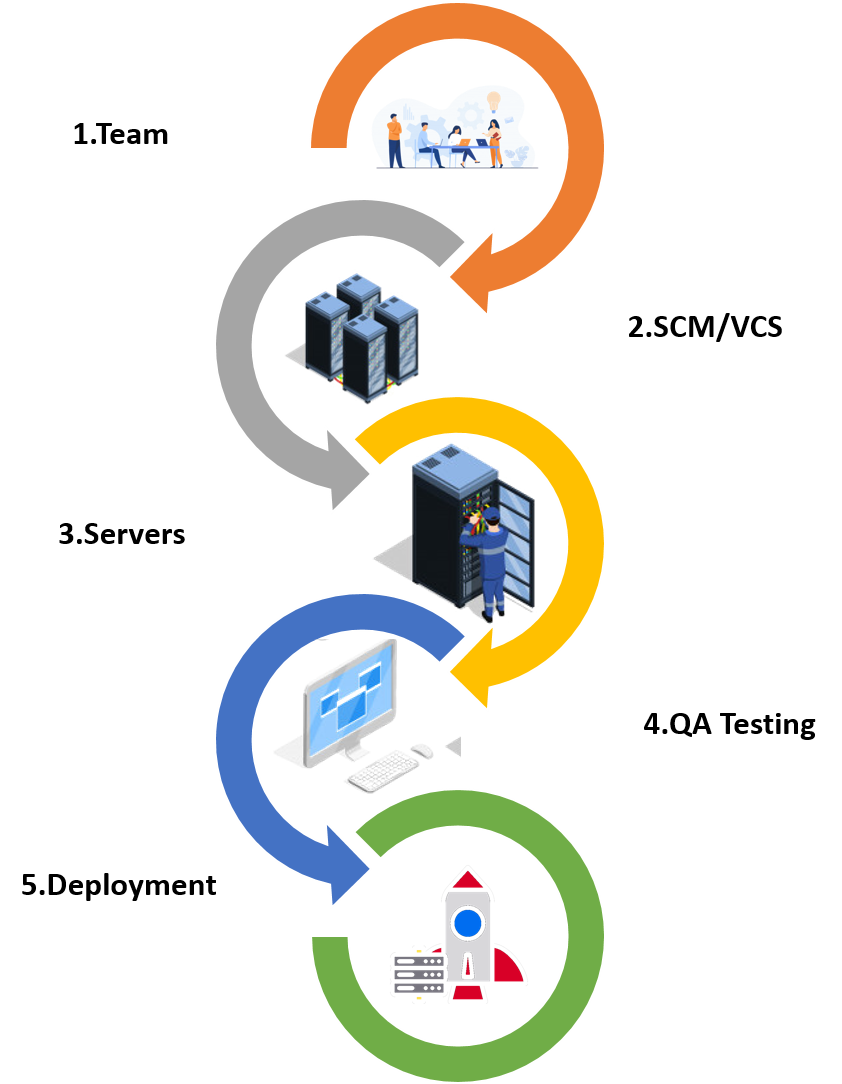 This process deploys the code on the production servers. It is also crucial to ensure that the code is properly deployed on all servers. Let us try to grasp a few things about containerization and configuration Management before we continue. Configuration management is the operation to release server installations, schedule server upgrades, and keep all servers compatible with configurations. Containerization tools ensure consistent application development, testing, and deployment across environments.

This stage is a critical part of DevOps’ life cycle, where it provides useful information that allows us to ensure maximum productivity and uptime of operation. The operations team obtains accurate testing tools to locate and correct the bugs/flaws in the software.

Tools Used: Nagios, Splunk, and ELK stack are used to monitor the application.

Let us, deep dive, into the typical architecture of DevOps and understand each phase in detail

A typical architecture of DevOps, which includes Development, Integration, and Deployment. We shall look into it in detail with the help of the below images for all the DevOps life cycle phases. 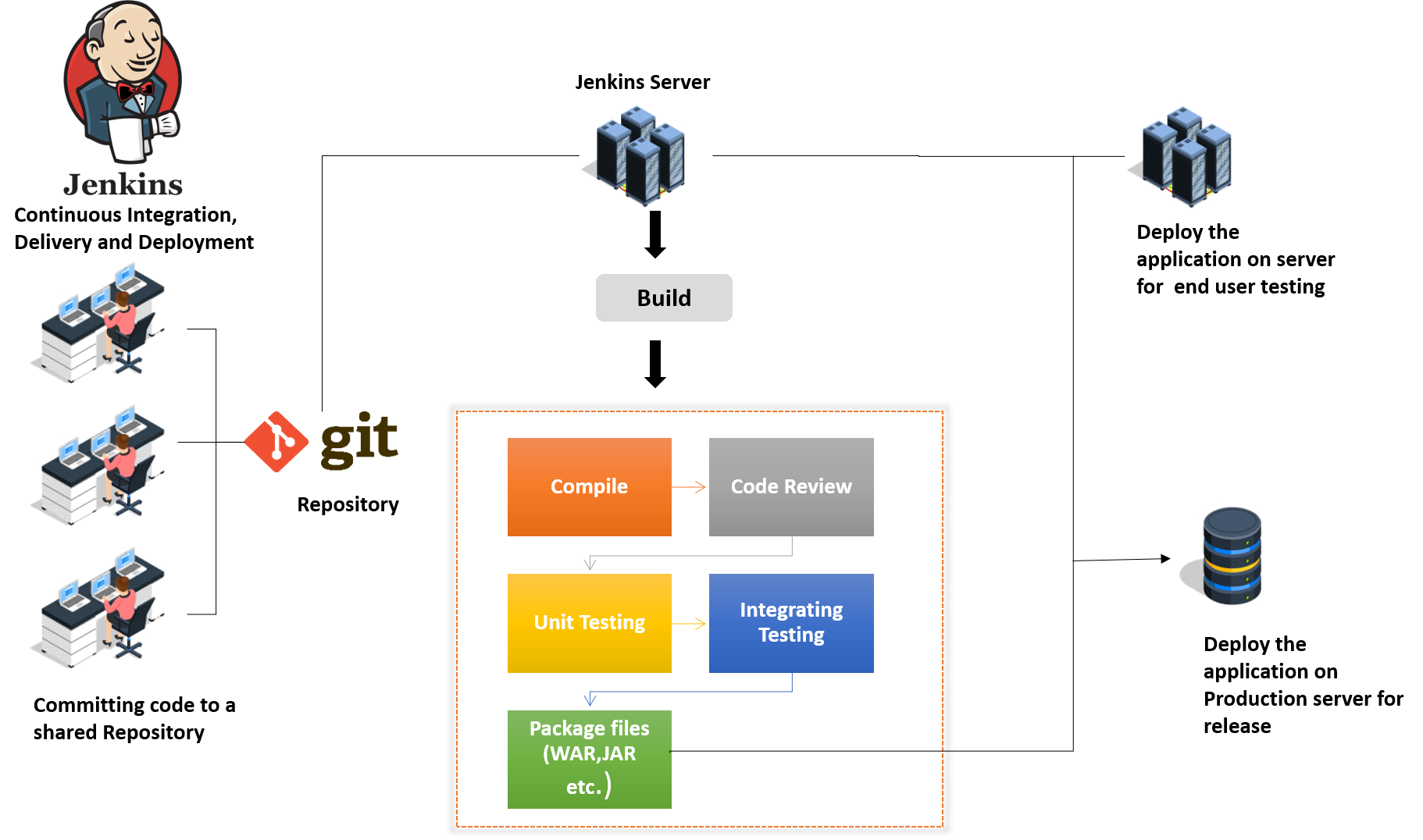 Continuous integration is a programming process where developers need to commit changes to the source code multiple times a day or more often in a shared repository. Each commit is then generated in the repository. This makes it easier for teams to detect problems early. Let us consider a scenario to know how Jenkins works,

Developer commits code to the repository source code. In the meantime, the Jenkins server periodically scans for changes on the repository. The Jenkins server detects changes that occur in the repository of source code, where it will pull the changes and plan a new build. After the built is successful, it deploys the built into the test server; Jenkins provides feedback and informs developers of building and testing outcomes. The source code repository will continue to search for improvements made to the source code, and the whole process will continue to repeat. Once this process is over, the application is ready for deployment on the production side.

The next image will illustrate the Deployment process where we use the containerization method with the help of Docker. 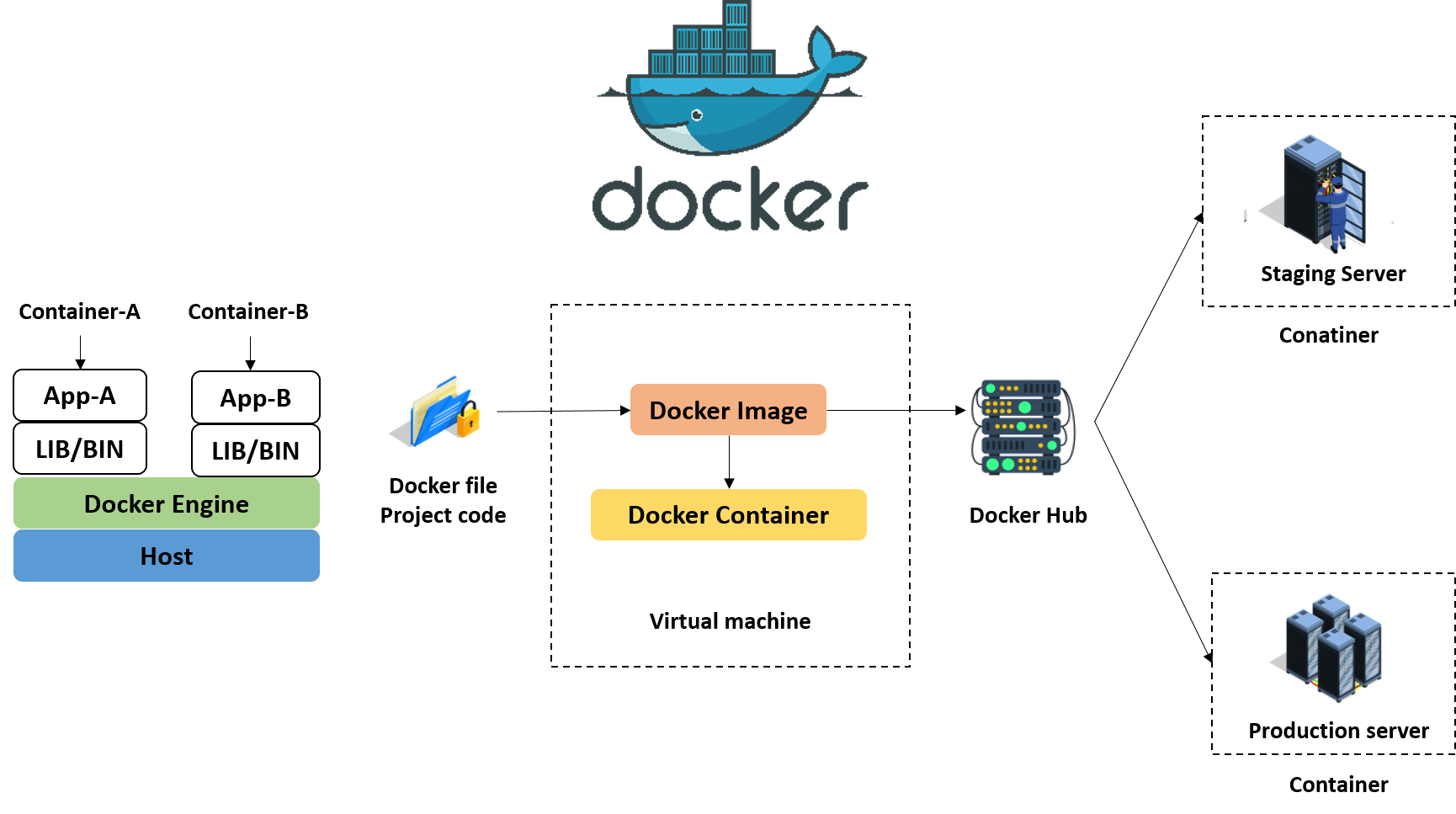 Before moving on to the process, let me just brief you about containers; these are nothing but lightweight alternatives to virtual machines. Each framework runs in different containers and has its own set of dependencies and libraries, as shown in the diagram. This means that each application is separate from other applications and ensures developers can create applications that do not conflict. Containers do not have a guest operating system and run the host; this makes containers unique.

Moving onto the process, whatever the application (Docker file) is built is converted to Dockers container with docker images. Docker Image can be contrasted with a Docker Container Creation template. Docker containers hold the entire package which is required to run the application. The Docker image is uploaded to Docker hub, which is nothing but a repository of Docker images. Any team, such as the testing or production team, can pull the images and create as many containers as they want from the hub. The main reason for doing that is that we can replicate the same application present in the Developer’s laptop in staging and production server with a consistent computing environment.

Finally, let’s look into Continuous monitoring using the Nagios tool as the image shows below,

Nagios is a tool used for continuous monitoring of systems, applications, and services in DevOps. Failure will alert the technical people, which allows them to rectify it before it affects the business processes. So, let’s see the working of this tool with the help of the above diagram,

Nagios usually runs as a service and has plugins that reside on the same server. They contact servers on your network, which either be remote or on the internet. You can view the status information using the web interface of Nagios or receive an SMS notification to your mobile phone. Now, this service behaves like a scheduler, as shown in the diagram, which runs the scripts and stores the same results and will run other scripts if these results change. Plugins are nothing but scripts that can be executed by a command line to check the service’s status. Thus, it determines the current status of your services on your network.

In the next part of this ‘DevOps Tutorial for Beginners’ article, let’s see the difference between different software development approaches.

Here, we will see key differences between Waterfall, Agile, and DevOps.

Let’s look into some popular tools used by DevOps. 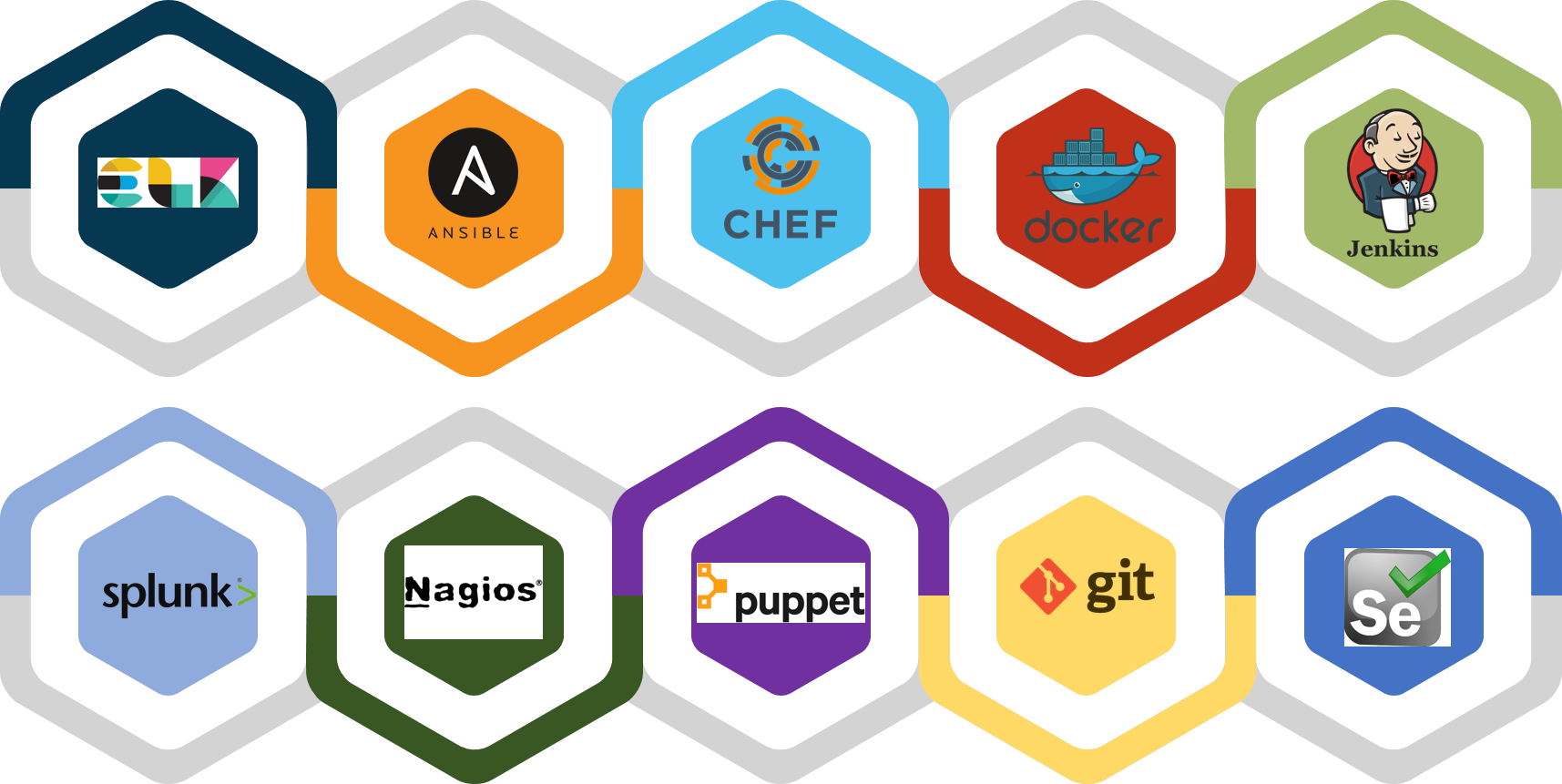 Next in this DevOps tutorial post let’s look at a few case studies.

Solution: By using Ansible Tower to control and schedule the cloud climate, this issue was solved.

Problem Statement: In 2006, developers spend around 5% of their time building different products such as printers, scanners, etc., and the rest on planning, integration, and testing.

Solution: To overcome that, HP incorporated the Continuous Integration/Continuous Deployment pipeline, which solved their problem.

Now, in this DevOps tutorial post, let me take you through why one should consider DevOps as a career option.

That’s it, Folks !! I hope you found the “DevOps Tutorial for Beginners” blog interesting. Please share your thoughts in the comment section of the “DevOps Tutorial for Beginners” blog. Now that you have Understood What DevOps is, its life cycle, popular tools, and to learn more about DevOps methodology, you should consider pursuing a popular DevOps Foundation Certification training from Invensis Learning.